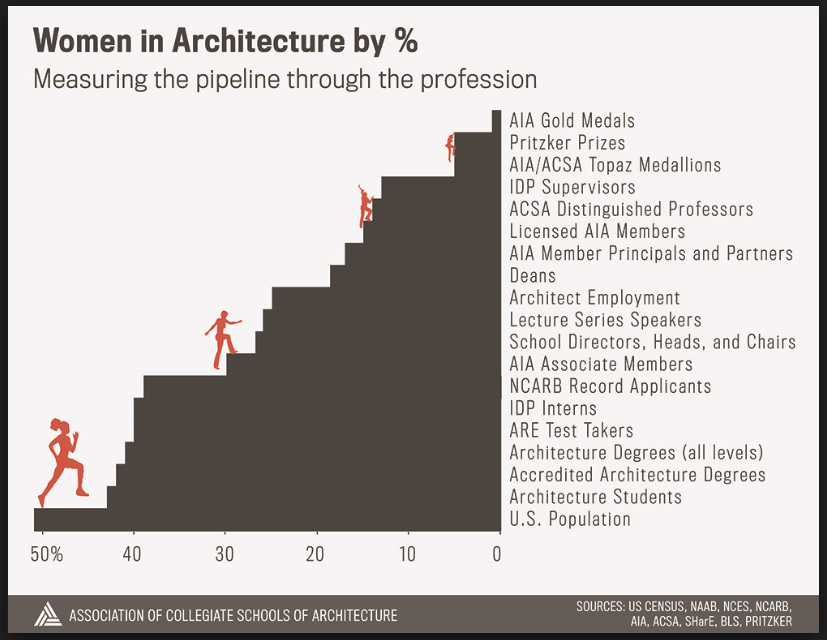 When I entered the workplace, men and women equally filled the intern positions. While being aware that there were lower percentages of women in the leadership of architecture firms, I believed this would disappear as my generation became the leadership. To ensure that the biases of the older generation would not impede opportunities being offered to women of my generation, I consciously minimized the differences gender introduced into the work place. I was confident that my competency would neutralize any gender bias that was assigned to me. Acknowledging the differences would amplify them, ignoring them would make them disappear.
As I advanced in my career, the number of my female colleagues dwindled, leading me to reflect upon possible sources for this attrition and the role gender has played in my career. I considered that the cost of child care, the stress two professional careers introduce to a family dynamic, the competition for success within a firm, and the tough environment of construction were contributing factors. I did not consider that bias towards women was a factor.
As a leader within AIA and my firm, I attended a workshop last year titled “Unconscious Bias and Impact on Decision Making” to support my growth as an open-minded and supportive leader. I was prepared to explore how unconscious biases limit our profession. While this was a portion of the workshop, it began with the assertion that every one of us has unconscious biases; it is a fundamental part human evolution. Every one of us is going through life reacting to biases that are largely unknown to us. Therefore, through our ignorance of them, they are affecting every decision we make. To begin to neutralize their impact upon our lives and the lives of others, we must identify our biases and understand their roots.
Over the last year, I have continued to think about unconscious (or implicit) bias, and I have come to realize how ingrained the denial is in our culture. In my professional career, when I have heard a male counterpart say something inappropriate about women, I have chosen, in large part, to move on, to not draw attention to the inappropriate comment or offer another perspective. In making this choice countless times I have missed opportunities to offer another perspective; I have failed to advance the conversation. This response has not been due to a reluctance to communicate or a desire to avoid tension; this response is motivated by a long-term desire to minimize my difference, to eliminate a gender bias. I now see there is no elimination of this bias, that we must acknowledge it and discuss it, and only in doing so can we finally move past it through heightened awareness.
Our profession, community, and world are becoming ever more diverse and with that diversity there are inevitably biases. Together we must not deny their existence, rather, we must work to communicate differences and reveal them. In beginning this process of discovery, we will advance our profession and maintain our relevancy.
I am rethinking the way in which I engage in the conversation and am seeking to become more involved in understanding the biases that affect me. Working with resources, such as Harvard’s Project Implicit, we can identify and explore our biases. Explore their tools for identifying your biases through:  https://implicit.harvard.edu/implicit/ or attend one of the Equity Committee’s workshop series on Implicit Bias in the Workplace. Together, we can expand our comprehension of the implicit biases that limit us and evolve with our changing culture.