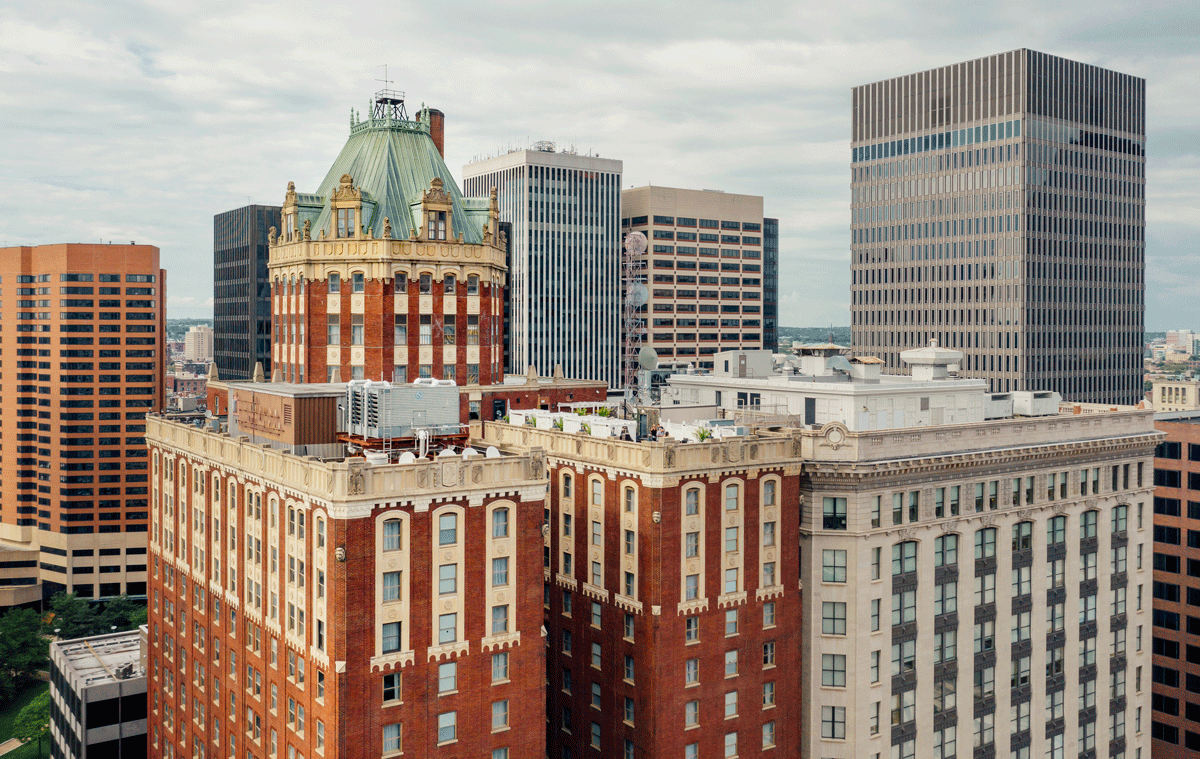 This self-guided tour leads you through nearly three centuries of living and working in Downtown Baltimore, from an 18th century home to passing by one of Baltimore’s remaining grand downtown hotels of the 20th century, and to Baltimore’s latest skyscraper.

Start/end your tour at David & Dad’s Cafe (115 N Charles St., in the Central Savings Bank building) which is offering a free coffee or soft drink with the purchase of breakfast or lunch.

The Central Savings Bank is one of the nicer Romanesque Revival designs surviving in downtown Baltimore. Spared destruction in the 1904 Baltimore Fire which stopped at its southern wall, it is a good example of adaptive reuse turning upper floor office space into luxury apartments and the former ground floor banking room into a café. It includes a 5-story atrium, original bank vaults, and view of Baltimore.

The building is a fine example of Romanesque Revival architecture, and the intersection here became an unofficial architects district with a cluster of the city’s firms located here. The building served as an early meeting place for AIA Baltimore members.

Built in 1928, the Lord Baltimore Hotel embodies the style of early 20th century high rise hotels before the rise of Art Deco. Newly renovated in 2014, the two-story grand lobby is not to be missed! The main entrance is on Hanover Street. Take a look inside one of the few remaining historic grand hotels in Baltimore.

The Wilkens-Robins Building was constructed in 1871 to house the local headquarters of his thriving business, The Wilkens Brush Company.  Wilkens occupied the building until 1904 when he relocated. During the restoration of the building in 1989, many of the missing details from the original structure were recast in aluminum and refastened. The cast-iron facade is one of the few of its kind still in Baltimore. See the offices of Ammon Heisler Sachs Architects. Please enter through the rear. Refreshments available.

The University of Maryland School of Medicine, established in 1807, is the first public and fifth oldest medical school in the United States. Davidge Hall, built in 1812, is considered the oldest building in the Northern Hemisphere in continuous use for medical education. The hall’s dome is a Delormé structure—a design also used at Thomas Jefferson’s Monticello. Come explore the anatomical theater daylit by the Delormé dome. Tours and video presentation available.

The manor home of Michael and Martha Warner, Rachael’s Dowry Bed and Breakfast is the oldest home in Ridgely’s Delight. It saw significant upgrades during Victorian times, including marble fireplaces and ornate tile work in the foyer. It later became a funeral home and then a hippy commune. Rachael’s Dowry was restored in the early 2000’s and has been a top-rated B&B since 2010. Refreshments available.

ican history and local life. Stop by and have a look at the other side of the spectrum of living and working in Baltimore in the mid-1800s.

414 Light Street is the tallest residential tower in the state of Maryland. It stands 44 storeys above the Inner Harbor and offers panoramic views of the city. The seventh floor features 40,000 square feet of amenities including an outdoor skyline park, a pool and sundeck, a fitness center, entertainment dining room with kitchen, and resident lounges.