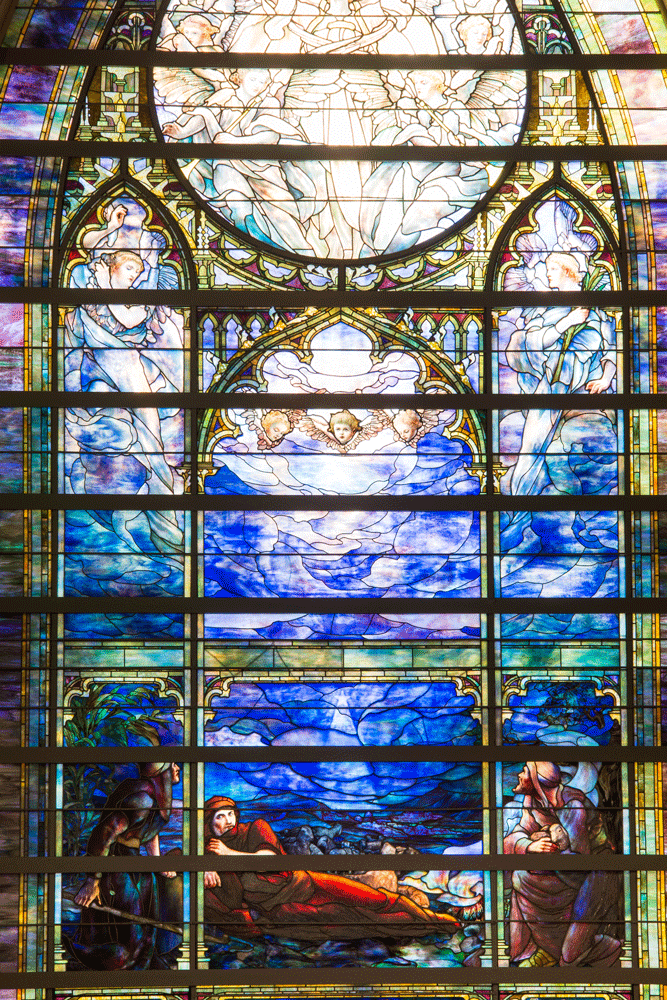 Take a look inside Baltimore churches that contain wonderful examples of the stained glass and mosaic work from the studios of Louis Comfort Tiffany (1848-1933).

Start/end your tour at Mt. Vernon Marketplace (500 Park Avenue) for a drink and a bite to eat!

St. Marks is one of only a few intact Tiffany-designed interiors in the world. It’s a glorious example of Tiffany’s vision, and it’s all there. Among the features of the interior that are attributed to Tiffany are its ornately decorated walls, mosaics, lamps and most of the stained glass windows. The church interior has been designated a Baltimore historic landmark.True to its Romanesque roots, the church has heavy stones, round arched doors and windows, and short columns, resembling St. Mark’s Basilica in Venice, Italy.

Brown Memorial houses an impressive collection of 11 Tiffany stained glass windows, offering examples of the novel techniques the artists of Tiffany studios used to create a limitless range of hues, colors, and textures in glass.It also features a vaulted ceiling, chancel designed by Ralph Adams Cram, and a Skinner Organ.

The interior boasts many Tiffany stained glass windows, a triple-vaulted sanctuary, and rich plaster tracery. Design for this commanding Gothic Revival church began in 1854 by architect Norris G. Starkweather, and eventually completed by his chief draftsman, Edmund Lind, who would go on to become a prominent architect in his own right. While the church was dedicated in 1859, the 273-feet tall cast-iron spire wasn’t finished until 1874.

Be sure to see the Tiffany windows and a magnificent John LaFarge window in the nave, and Daniel Chester French sculpture in Baptistry. Emmanuel Church, a daughter parish of Christ Church, Baltimore, was constructed in the Italianate style with a Tuscan bell tower and rubble masonry. Today, only the exterior walls and lancet windows are left of the original design as the church was extensively renovated in the 1910s and 1920s. Architects Goodhue, Cram & Ferguson transformed the church by raising the roof and floor to create room for a chapel on the lower level and adding a Gothic Revival tower. This larger Gothic Revival building is what you see today.

See the Tiffany-designed mosaic that depicts “The Last Supper” as well as seven Tiffany windows. The First Unitarian Church of Baltimore is the first church in the United States built for and by Unitarians, which is still in use by the same congregation as a Unitarian church. It is architect Maximilian Godefroy’s major Baltimore work and one of the city’s finest buildings of the period. A daring modern design when it was constructed, the building utilizes the basic shapes of the cube and the sphere with a minimum of detail on the flat planes to emphasize the geometry of the structure. In the late-19th century, major reconstruction of the interior of the sanctuary was undertaken with the addition of a barrel-vaulted ceiling, a Tiffany mosaic and seven Tiffany windows, and a magnificent Niemann organ.

Lovely Lane features stained glass windows designed by Tiffany and is both an exemplary example of Romanesque Revival architecture and a piece of religious history. The church was commissioned by pastor Dr. John Goucher in 1884 and designed by renowned architect Stanford White. The church’s rugged facade is constructed of Port Deposit granite and its commanding bell tower is modeled after the 12th century church of Santa Maria, Abbey of Pomposa, near Ravenna.