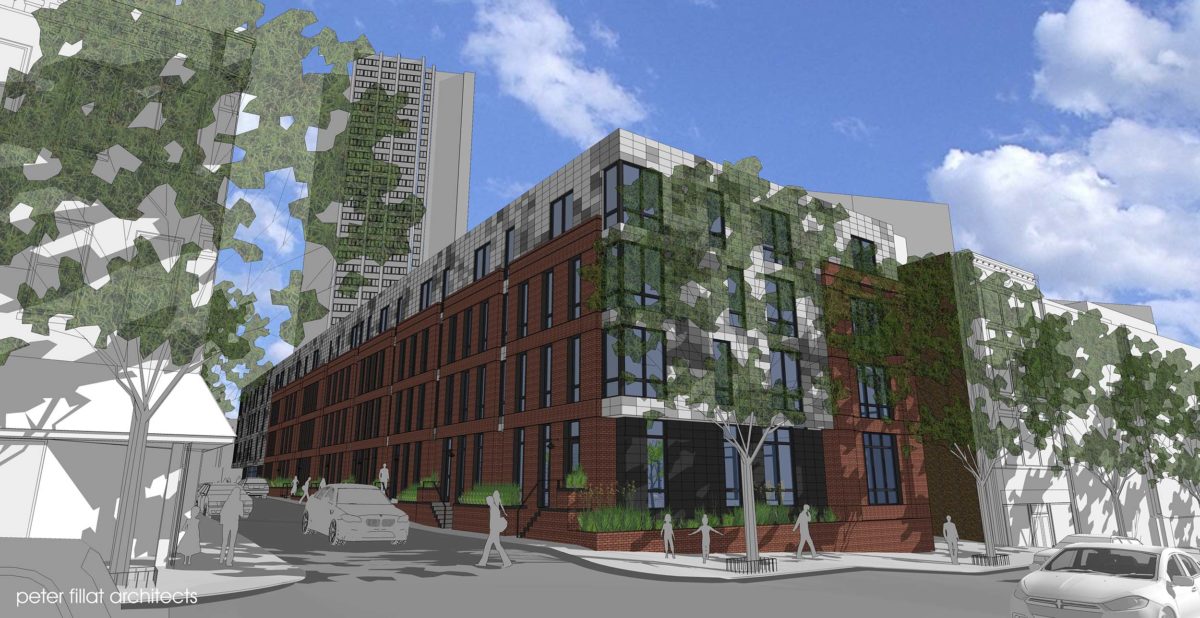 BALTIMORE, MD (April 25, 2016) – Peter Fillat Architects has announced that two of its low-income housing projects will begin construction this year after being awarded funding approval.
The apartments at 300 Warwick were awarded funding late last year and L on Liberty was given funding early this year. The two projects will bring 154 affordable housing units to downtown Baltimore and hopes to bridge gaps in neighborhoods, creating a more unified, diverse city. Both projects are LEED Silver and provide exterior courtyards, bike storage, community rooms, and exercise rooms.
300 Warwick will provide 80 of the low-income housing units meant to offer dignified housing to the workforce of West Baltimore. “We wanted to create an architecture of inspiration,” said Peter Fillat, principal in charge of design. “The design has a dignity not often found in these sorts of projects.” The building is to be built on a former industrial parcel and is inspired by the dynamic movement of the nearby North East corridor of Amtrak.
“L on Liberty’s unique façade was inspired by a historic photograph of the area’s shopping district,” said David Marcozzi, associate principal at Peter Fillat Architects. “It’s a unique approach to link the area’s past with the present.” This building will also provide its residents with a green roof.
The 54 unit L on Liberty project is being completed with the same development company, Housing Trust of America, with whom Peter Fillat Architects created the very successful M on Madison. M on Madison, another low-income housing project in downtown Baltimore, was fully leased within six weeks of completion.
Peter Fillat Architects is a design studio based in Baltimore, with offices in Washington, D.C., New York, and San Diego. Its practice serves both the public and private sectors with a focus on architecture, interior design, urban design, and sustainable practices. Its international portfolio encompasses hotels, resorts, multi-family residential buildings, offices, retail, and mixed-use buildings.
Peter Fillat Architects is celebrating its 25th anniversary in March of 2017.
Release courtesy Peter Fillat Architects