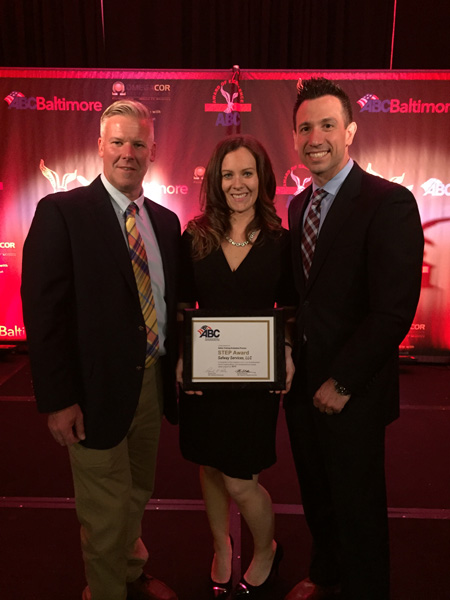 April 29, 2016 (Waukesha, WI) – Safway Services’ Laurel Branch has received a Gold Level Safety Training and Evaluation Process (STEP) Award as well as a Chapter Safety Award in recognition of its safety practices and results. Associated Builders and Contractors (ABC) granted the awards after the branch achieved zero Occupational Health and Safety Association (OSHA) recordables in 2015.
The Gold Level award is one of the highest safety honors bestowed by ABC. The award was formally presented to the Laurel Branch April 28, 2016 at the Hyatt Regency, Baltimore at ABC’s Annual Awards of Excellence. Safway was similarly recognized by the ABC Metro Washington D.C. Chapter on Oct. 15, 2015. Laurel is active in both chapters.
Safway Marketing and Business Development Manager Denielle Hickman, Laurel Branch Manager Gary Boncich and Sales Representative Steve Quaerna accepted the award.
“At Safway, safety is paramount. We as a branch cannot achieve success in the absence of safety. It’s futile to measure productivity or efficiency unless each individual goes home safe every day,” said Boncich. “Managers can teach, implement programs and monitor, but the field crews need to own our safety culture, and they do. We had to have numerous safety and health programs in place to win this award, but it really comes down to what happens on the job site.”
In particular, he said, “Safway Laurel Branch foremen Jose Diaz, Rutilio Leon, Louis Rivas, Jose Rosales, Robert Aikens, Nassin Frias, Demetrio Garcia, Kevin Jenkins, Cesar Montilla, Clarence Durham, Julio Vasquez and Jose Umana are the ones who are really responsible for this accomplishment, along with Construction Managers Dallas Luttrell, Faustino Alvardo, Lisandro Arriola, Levy Rivera, and Robert Born; and Operations Manager Micheal Earle.”
“Every day we need everyone, on every jobsite and in every workplace, to get involved and practice good safety,” adds Paul Amedee, vice president of Safway. “We all understand that unless everyone on the job goes home safe to their family at the end of the day, the rest of it doesn’t matter.”
Safway has established 10 Life-Saving Rules along with a Stop Work Policy to ensure that every employee understands that his or her actions are critical to ensuring safety throughout the thousands of jobsites across North America. Safway Group is also partnering with the National Institute for Occupational Safety and Health (NIOSH), the Occupational Safety and Health Administration (OSHA) and The Center for Construction Research and Training (CPWR) on a national initiative to prevent falls, the leading cause of work-related injury and deaths.
Safway received similar Gold Level honors in 2014
Release courtesy Safway Services, Laurel Branch