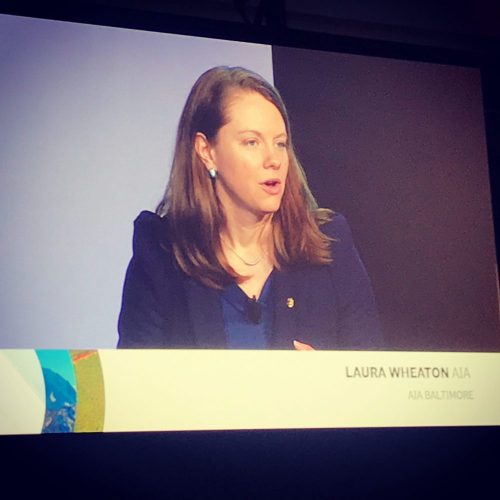 My Experience at AIA Grassroots 2020

When offered a soapbox, one has a responsibility to use it well or not at all. When I was given the privilege of speaking at a Grassroots breakout session and luncheon panel last month, it was important to share not just my story, but how it is interlaced with so many others. Most Baltimore stories, and I would imagine most all stories, feature an ensemble cast rather than a hero’s journey. Architects sometimes play a key supporting role, alongside community residents, leaders, teachers, politicians, youth, and other stakeholders.

I shared four such Baltimore stories, although there were many to choose from. They featured community stakeholders like the Boyd-Booth Community, the African American Fire Fighters Historical Society, the South Baltimore Community Land Trust, the South Baltimore Gateway Partnership, the Historic Pennsylvania Avenue Main Street, the Upton Planning Commission, the Dorothy I. Height Elementary School, Child First, the Reservoir Hill Improvement Council, and the wonderful Neighborhood Design Center. They featured architects like Renata Southard, Jason Neal, Richardson Jean-Baptiste, Mark Nook, and Sara Langmead. Baltimore is rich in architects who work alongside communities to design approaches to the challenges they face. They lead by listening first.

The breakout sessions were structured to offer ample time for attendees to share their stories. I learned about successes in building new publicly-owned green spaces with public-private partnerships in New York City, faith institutions building affordable housing in Northern Virginia, and learning symposiums in Columbus that better enabled architects to understand the dynamics of development. Grassroots is a conference where everyone present is a leader and an advocate.

At Grassroots, we stood united in our commitment to fighting climate change. There is something awesome in witnessing this national institution, representing 95,000 architects from Maine to Guam, focus on one critical issue—that we must do all we can to reduce the impact our built environment has on our climate, for the benefit of all our communities. It is a message I know resonates in Baltimore and I hope resonates everywhere.

Many thanks to Tom Liebel, Scott Walters, Kathleen Lane, and Scott McGovern, who either officially or unofficially helped facilitate conversations during the breakout session. I’m appreciative that AIA President-Elect Peter Exley offered me the chance to speak, and that AIA Strategic Council Member Mike Elliott collaborated on the development of my session.