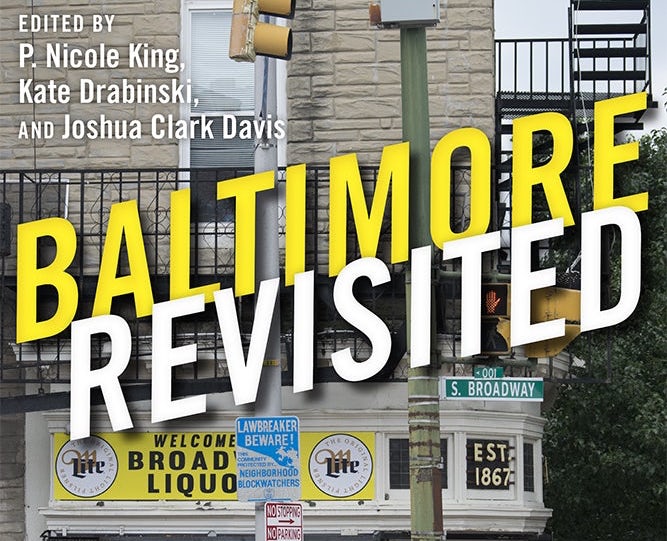 [Book Review] Baltimore Revisited: Stories of Inequality and Resistance in a U.S. City

In 1826 at a produce store located at 61 Calvert Street a remarkable act of defiance occurred. Citing their Quaker beliefs, proprietors Michael Lamb and Benjamin Lundy refused to sell produce made with slave labor. They believed that “free labor is, invariably, more profitable than that of slaves. For this reason and from motives on a conscientious nature, (we) have resolved to abstain from using the productions of slave-labor.” This radical position, the original free trade, was even more astonishing because slaves were being bought and sold just a few blocks away in pens close to Lexington Market.

That Baltimore was the setting for such divergent views on race should come as no surprise.  Considered both the southernmost city of the North and the northernmost city of the South, Baltimore has always exemplified the worst when it comes to racial inequality, and the best when a committed few fight back. As such, racial injustice and opposition to it has largely defined Baltimore. This dynamic factors into its history, culture, art, economics, politics, and even its very shape.

This dynamic is the subject of Baltimore Revisited: Stories of Inequality and Resistance in a U.S. City. With over 20 short chapters and a few even shorter “snapshots”, the book examines the ebb and flow of racial justice in Charm City (aka Mobtown). It is wide-ranging. It covers familiar topics such as heavy-handed gentrification (Johns Hopkins’ redevelopment of East Baltimore), failed urban renewal projects (Charles Center Skywalk), and egregious housing policies (Baltimore’s nationally vilified red-lining); to lesser-known subjects such as the struggle of displaced First Nations people in East Baltimore, biased film censorship, and early environmental activism.  The common thread in all chapters is that Baltimore has an established history of inequality and an equally robust record of resistance.

An exemplary chapter is The City that Eats: Food and Power in Baltimore’s Early Public Markets. In it, historian Robert P. Gamble deftly discusses how food markets shaped Baltimore along race and class lines.  He explains that the first market structures were plain open-air sheds that not only sold food but were the loci of activity that ranged from sermons to prostitution (e.g. Center Market, 1760s). This atmosphere, “permitted a temporary carnivalesque suspension of racial and class hierarchies”.  However, there were complaints. An 1806 petition described “Lewd women and Black and White and some yellow men & many of Different Caulers fighting and Disturbing the Neighborhood”.  In response, as the city grew, the City Council authorized more upscale markets to appease these nascent NIMBYs. Intentionally more fashionable, the more elaborate “architecture was an indicator of shifting priorities” (e.g. Lexington Market). These markets and their environs were also heavily policed to keep away “lewd women” and others deemed undesirable. Having been effectively forced out of the new markets, people of color turned to smaller “green groceries” which were the precursors of the corner stores found in many neighborhoods today. But even these meager food outlets came under attack from powerful butchers who rented expensive stalls in the newly established markets. These butchers were successful in eliminating enough green grocery competition to create a need by lower income residents to find affordable and accessible food.  As a result, Baltimore’s unique Arabbers flourished to serve what we now call food deserts.

Food deserts. Fair trade. Gentrification.  Baltimore Revisited provides historical underpinnings to these and many other vexing issues we continue to grapple with today. With academic rigor (there are hundreds of footnotes) it holds up an unassailable mirror to Baltimore’s past. Most contributing writers are from Baltimore and their local knowledge and passion are evident throughout the book.  Accordingly, some chapters read like a novel. In Vacant Houses and Inequality, Eli Pousson vividly recounts the dangers of abandoned houses: “In August 1913, seven-year-old Elizabeth Handley was skipping in and out of a condemned house at 604 Gutman Avenue in Waverly. Earlier that afternoon Harry W. Fox and a crew of workers had stopped demolition for the day, leaving an unsupported brick wall. At 6 P.M. that evening, Elizabeth was caught beneath a falling wall while playing in the ruins. She died almost instantly.” What could easily have been an academic tome, comes to life with such writing, particularly when supported with images and helpful maps. As such Baltimore Revisited offers a vivid look into the past.

It is also an important look at the present. As of this writing, statues tumble and protests rage, as the city and nation roil with racial reckoning. To better understand the current zeitgeist, it is essential to know that these issues have antecedents. Turmoil did not start with George Floyd or Freddie Gray.  Baltimore Revisited offers a clear, succinct, and readable resource for those who seek to make sense of the protests and frustration seen in the news cycle. Although it focuses on Baltimore, the lessons it teaches are nationally relevant. It is essential reading.

Available at the Baltimore AIA Bookstore.

Greg Andoll is an associate architect at Penza + Bailey Architects