Ephraim Francis Baldwin was born in Troy, New York, on October 4, 1837. His father, Alonzo Clarke Baldwin, was a civil engineer; his mother was Mary Elizabeth Elder, the daughter of a Baltimore merchant. 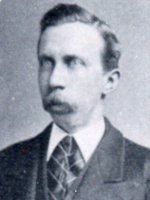 When his father died in 1843, his mother returned to Baltimore where Baldwin was raised and educated. He attended Loyola High School in 1850-52. Contrary to popular reports, Baldwin did not graduate from college, but he was enrolled for one year (1854-55) at Mt. Saint Mary’s College in Emmittsburg. Baldwin married Ellen Douglas Jamison in 1873; they had seven sons and two daughters. They lived for over 30 years at 1524 Druid Hill Avenue, moving to the Dixon Park section of Mt. Washington in 1904. Baldwin, a devout Roman Catholic, died at his home on January 20, 1916. He is buried in New Cathedral Cemetery in Baltimore.

E. Francis Baldwin learned architecture as a draftsman and apprentice in the offices of Niernsee & Neilson. His first works of any consequence were probably with Niernsee on Mt. Hope Retreat (later the Seton Institute, now demolished) in Baltimore. After he left in 1867, he practiced alone for two years.

In 1869, Baldwin entered into a partnership with Bruce Price (1845-1903), who also trained with Niernsee & Neilson. The offices of Baldwin & Price were located at No. 54 Lexington Street, on the southwest corner of Charles and Lexington in the heart of an enclave of architectural offices in Baltimore. Price severed his partnership with Baldwin in 1873, and moved to Wilkes-Barre, Pennsylvania.

During the next ten years, Baldwin practiced alone. In 1883, he formed a partnership with Josias Pennington (1854-1929), who had been a draftsman for Baldwin. That partnership lasted until Baldwin’s death. The offices of Baldwin & Pennington were located in the top floor of the Farmers & Merchants Bank building on the northwest corner of South and Lombard. After the destruction of this building in the 1904 fire, the firm relocated in the Professional Building on North Charles Street.

Francis Baldwin and Bruce Price were elected to membership in the Baltimore Chapter of the AIA in December 1870. Baldwin served as a Secretary of the Chapter for a time in the mid-1870s. After what was described as an “imbroglio” between himself and a competitor, George A. Frederick, Baldwin resigned from the AIA in 1888.

Relatively little is known about Francis Baldwin’s personal life. His obituary noted that he was a Democrat and that he enjoyed swimming, driving and riding horses, and motoring. He was a member of the Loyola Alumni Association, the St. Vincent de Paul Society, and the Young Catholic’s Friend Society. According to items in the Baltimore Sun, in 1870 he and E.G. Lind and J.C. Neilson were elected Directors of the newly organized Maryland Academy of Arts. In 1890, he and Charles E. Cassell were actively proposing the creation of a School of Architecture in Baltimore. Baldwin was awarded a gold medal, “Bene Merenti,” by Pope Leo XII for his work on the buildings at Catholic University.

Baldwin practiced for fifty years. His work includes churches, banks, office buildings and warehouses, railroad stations, municipal and public buildings, hospitals, schools, clubs, and residences. His clientele was diverse and his buildings could be found, from New York to Ohio, and from Pennsylvania to Georgia. The greatest concentration of work was in Maryland, and especially in and around Baltimore. Altogether, about 500 buildings and/or projects have been identified. About 80 percent of these were in Maryland. And in-state or out-of-state, about one-third of those works are extant today (about 150 buildings).

The Baltimore & Ohio Railroad played an important part in Baldwin’s career. In about 1872, Baldwin was designated the Architect for the B&O Railroad inheriting the job from his former mentor, John Rudolph Niernsee. The B&O Railroad was a major client for this architect in the rather lean years of the early 1870s and for about the next 25 years, the B&O would be a steady, “bread-and-butter” account for Baldwin. Collectively, the next biggest client (if not the biggest) was the Catholic Church. Baldwin took a special interest in ecclesiastical work, a pursuit undoubtedly motivated by his own religious convictions and dedication. Baldwin’s work on Catholic churches, seminaries, schools, and health care facilities spans his entire career, from the mid-1860s to his death.