Born and educated in Baltimore, George A. Frederick began preparing for a career in architecture at the age of 16, entering the offices of Lind & Murdoch, one of Baltimore’s most prominent architectural firms, as a draftsman trainee. 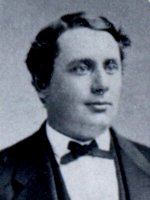 He also received training in the offices of Niernsee & Neilson. Among his first commissions following the establishment of his own practice in 1862 were the various structures in Druid Hill Park (Frederick would serve as architect to the Parks Board from 1863 to 1895). Also early in his career, he won a competition to design the new Baltimore City Hall and supervised its construction from 1866 to 1878. The monumental structure, considered one of the finest municipal building in the country at the time, was also one of the nation’s first buildings to employ fireproof construction techniques.

His projects for Baltimore city government extended beyond the Druid Hill Park structures and City Hall to include the Hollins Market (1865) and the old City College building on Howard Sfreet (1873; replaced 1895). Frederick also designed the building which represented the State of Maryland at the 1876 Centennial exhibition in Philadelphia (this structure, later moved to Druid Hill Park, is a rare surviving structure from the Centennial). Other state work included the state prison at Jessup and the restoration of the Senate chamber at the State House in Annapolis.

During his career, he designed numerous churches for various denominations in Baltimore and throughout Maryland. His German ethnic background brought him a number of commissions from Baltimore’s large German community, including the German Correspondent Newspaper Building (1869), institutions for German orphans and aged persons, and residences and breweries for prominent German brewers in the city.

An important surviving example of Frederick’s commercial work is the Abell Building (c. 1878).

Frederick was a charter member of the Baltimore Chapter of the AIA, founded in 1870. He was raised to Fellowship in the Institute in 1877, and served for several years on the national Board of Directors before retiring from practice in 1903. In 1912, Frederick recounted his recollections to J. B. Noel Wyatt, who was then President of the Baltimore Chapter of the AIA. His reminiscences, preserved in manuscript form at the Maryland Historical Society, present a vivid picture of the practice of architecture in nineteenth-century Baltimore.

A comprehensive list of Frederick’s work can be found at georgeafrederick.com