Joseph Evans Sperry was born in 1854 in Georgetown, SC, the son of David Anson Sperry and Sarah Evans Sperry. The family came to Baltimore in 1868. Two years later, at the age of 16, he first advertised his architectural practice in the classifieds business section of the Baltimore City Directory, with an office located at 161 W. Lombard Street (now 113 W. Lombard Street). 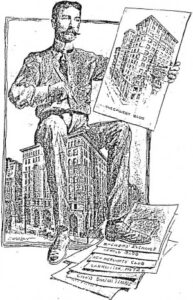 He is not listed in the directory between 1872 and 1876. During this period he was working in the office of E. Francis Baldwin.  Drawings from that office in that period credit Sperry as delineator. He returned to independent practice in 1877, his office located in the Lexington Building at the southwest corner of Charles and Lexington Streets.

In 1878, the following year, he entered into a partnership with J. B. Noel Wyatt, the beginning of two firms of major importance. These firms, Wyatt & Nolting and The Office of Joseph Evans Sperry, brought 19th century architectural practice into the 20th century with consulting engineers for mechanical and electrical design services.

The Wyatt & Sperry office was in the Lexington Building until 1882, when it moved to 55 N. Charles Street (now 301 N. Charles Street). The Wyatt & Sperry partnership ended in 1887 when Sperry moved to Kansas City. He returned to Baltimore a year later, married Miss E. Lee Wilson, and re-opened his office. By 1889, his office was in the old Central Savings Bank building on the SE corner of Lexington and Charles Streets, originally the Lorman house designed by Robert Cary Long Sr. and remodeled for the bank by George A. Frederick. Soon he associated with Charles L. Carson. The two were on the verge of formalizing their partnership when Carson died in 1891.

For several projects after the Baltimore Fire of 1904, Sperry associated with the New York City firm of York & Sawyer who maintained offices in the same building. Herbert G. Crisp (1867-1939) joined Sperry, was made a partner in 1915 and the firm was Sperry & Crisp.

Sperry died in 1930 and is buried with his wife in Loudon Park Cemetery in Lot Y-179 under a large stone of natural flint with a bronze scroll for the inscriptions, probably designed by himself. He was remembered by his peers as a “tower of ethical rigidity.”

Crisp & Edmunds continued the practice. James R. Edmunds, III (1914-1973) later continued the firm as The Office of James R. Edmunds. By 1947, Bryden Bordley Hyde (1914-2002) was a partner and with Edmunds’ death, the firm became Edmunds & Hyde. The firm closed April 13, 1992, by then the oldest architectural office in Baltimore. Bryden Hyde donated more than several hundred Sperry drawings to the Maryland Historical Society.