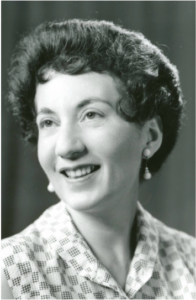 “The arts are a universal language, understandable to other nations.  The challenge is yours. Make the most of it.”
Hagerstown Morning Herald, April 17, 1968

Born in Milan, Italy in 1914, Melita Rodeck was raised in Vienna, Austria. A gifted student from a young age, she was encouraged to study architecture by her parents, Armin, an engineer, and Martha Asher, a painter. She received her degree in architecture from the Polytechnic Institute in Vienna in 1936. After emigrating from Austria in 1939, she eventually settled in Washington DC in 1950.

Rodeck began her career with the General Services Administration and became a registered architect in 1952. She joined the Washington Metropolitan Chapter of the AIA despite an unwelcoming initial meeting where she was the only woman present and was completely ignored by her male counterparts.

Following a cancer operation in 1956, she embarked on a world tour, studying  new towns, agricultural settlements, urban renewal, public housing, suburbs, and regional planning in Australia, the Philippines, Thailand, India, Italy, France, Germany Belgium, and England. Upon returning to the U.S., Rodeck worked with various architectural firms before starting her own in 1958. Melita Rodeck & Associates completed new constructions and alterations for residences, religious institutions, and government facilities in Maryland, Washington, DC, and beyond. She returned to government work in 1968 and retired in 1985. Her papers are archived as the Melita Rodeck Architecture Collection at the International Archive of Women in Architecture, Virginia Polytechnic Institute and State University.

1936 – Graduates from Polytechnic Institute, Vienna, Austria with degree in Architecture

1951 – Receives degree in Structural Engineering  from the University of Virginia

1963-1968 – Lectures for Department of City Planning, Catholic University of America