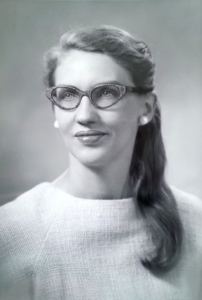 “Draw. Learn how to draw (by hand), regardless. (Learn) to sketch your ideas quickly…And go on jobs as much as you can.”
Interview, November 23, 2014

Shirley Kerr Kennard began her career in Washington DC with architect Horace Peaslee in 1950. After seeing her thesis renderings at Cornell, he invited her to work on a competition for the remodeling of a mansion on Massachusetts Avenue into the Cosmos Club. His firm won the competition and it proved prescient for her career. In an office of only three people, she had the opportunity to visit job sites and see construction first hand.

When work slowed down, Kennard joined Faulkner, Kingsbury & Stenhouse Architects, a firm specializing in hospital design. There she met architect H. Hunter Kennard. They married in April 1954. In August, The Washington Post described their residence—a gut remodel of a 14’ wide rowhouse on I Street—as an “architect’s holiday” in reference to how architects choose to spend their free time.

With a growing family, the Kennards moved to Montgomery County. They opened their own firm in 1958 so they could practice architecture and maintain a family life. Work was steady and it brought a rhythm to their lives. In 1959, the National Capital Planning Commission selected Kennard & Kennard Architects to complete the master plan for Columbia Plaza, an urban renewal project in northwest Washington DC. They had six weeks to develop the conceptual design for an apartment community of 800 residents. Much of their vision can be seen in the project’s final development, which brought them exposure and additional commissions.

In 1967, they began a complete redesign of their 1920s bungalow to incorporate an office and living space suitable for a family of four. It won them the 1969 Wood Structure Design Award from the National Forest Products Association for “exemplifying the virtues of lumber and demonstrating the workability of wood.” The Kennards were a true team throughout their career, collaborating on over 500 projects in Washington DC and Maryland, two thirds of which were custom designed homes. When they didn’t agree on a design, they would start over. Kennard reflects positively on her life choices, knowing she and Hunter have shared a full life together and have made a difference in people’s lives.

1939 – Family builds a second floor on their bungalow

1945-50 – Attends Cornell University and starts in Liberal Arts College; Switches to Architecture in 2nd year; Spends summers making up design studios and working for an architecture firm in Pittsburgh where she moved with her family; Graduates with honors and Bachelor of Architecture; Becomes a member of AIA, Association of Women in Architecture

1956 – “An Artist Views Foggy Bottom” Rendering in the Washington Post, May 16

2003 – Retires from architecture practice; does small jobs for fun & friends

2015 – Moves to retirement community in Mitchellville with Hunter