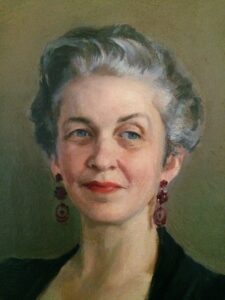 Victorine du Pont Homsey, FAIA, and her husband founded their firm of Victorine & Samuel Homsey, Inc. in Wilmington, DE in 1935, one of the first husband-and-wife architectural practices in the US. Their initial projects were concentrated in Delaware, but by 1940, they had already won a Maryland Society of Architects Design Award for their Cambridge Yacht Club in Cambridge, Maryland.

Their rise to fame was quick and work spread along the eastern seaboard. Architectural Record featured their office in its September 1937 and 1941 issues. The Museum of Modern Art selected their house design to represent the International Style for the 1938 Paris Exhibition. However, Homsey writes in 1941: “We certainly are not modern if that means following worshipfully the so called functional or International Style…nor do we follow with blind admiration the great designers of earlier periods. We try to work out each job as a totally separate problem and to divorce from our minds any preconceived idea of style.” Their designs held the same basic ingredients of flexibility, simplicity, and quality, an honest expression of a design solution without the use of superficial decoration.

The period they started practicing was lean: from the Depression to wartime. Homsey wrote: “We trust more vigorous architecture will be the answer to this challenge” and felt the ingenuity of the architect was to develop economical methods of building. During World War II, the family relocated to Washington DC while Samuel served in the Navy. She designed war worker housing for the Federal Housing Administration. She also collaborated with architect Eugene H. Klaber on projects in Greenbelt, including the North End Elementary School to address the town’s burgeoning student population. Scarcity of materials held up construction and kept the projects modest, but they included simple design touches, such as classrooms painted sunlit yellow with stacked, outward swinging windows for ventilation, even in the rain.

Homsey became a member of the Washington Metropolitan AIA Chapter in 1944, and received a license to practice architecture in Washington DC in 1945. The couple returned to their Delaware practice soon after the war ended, but continued to take on a variety of projects in Maryland. The 1960 Funkhouser Residence in Hagerstown is project they were proud of. A chance meeting in Tehran, where the Homsey’s were designing the US Ambassador’s residence, they met the Funkhousers on a world tour and produced a quick napkin sketch. Later that simple diagram would materialize into a beautiful home featured in the Baltimore Sun, designed to allow the treasures acquired on the couple’s many trips to be showcased.

Homesey credits her training at the Cambridge School in giving her skills in landscape design to suit their projects to their settings. In June 1948, she was featured in Architectural Record’s “A 1,000 Women in Architecture” series. She followed in her husband’s footsteps and in 1967 was elevated to AIA Fellow. Both Homseys retired in 1979 and the office continues under the direction of their son Eldon. In 1998, Homsey passed away at the age of 97, leaving a legacy of an inspiring success story.

1919 – Graduates from the Laurel School in Cleveland, OH

1941 – Architectural Record features their firm is in September issue

1942-1946 – Husband serves as Navy commander in the Office of Research & Inventions for the Naval Reserve; Family moves to Washington, DC

1954 – Husband is Juror for exhibit: Blueprint for Tomorrow: A Survey of Baltimore’s Architectural Future held at Peale Museum

1967 – Elevated to AIA College of Fellows

1980 – Travels with her husband to Beijing